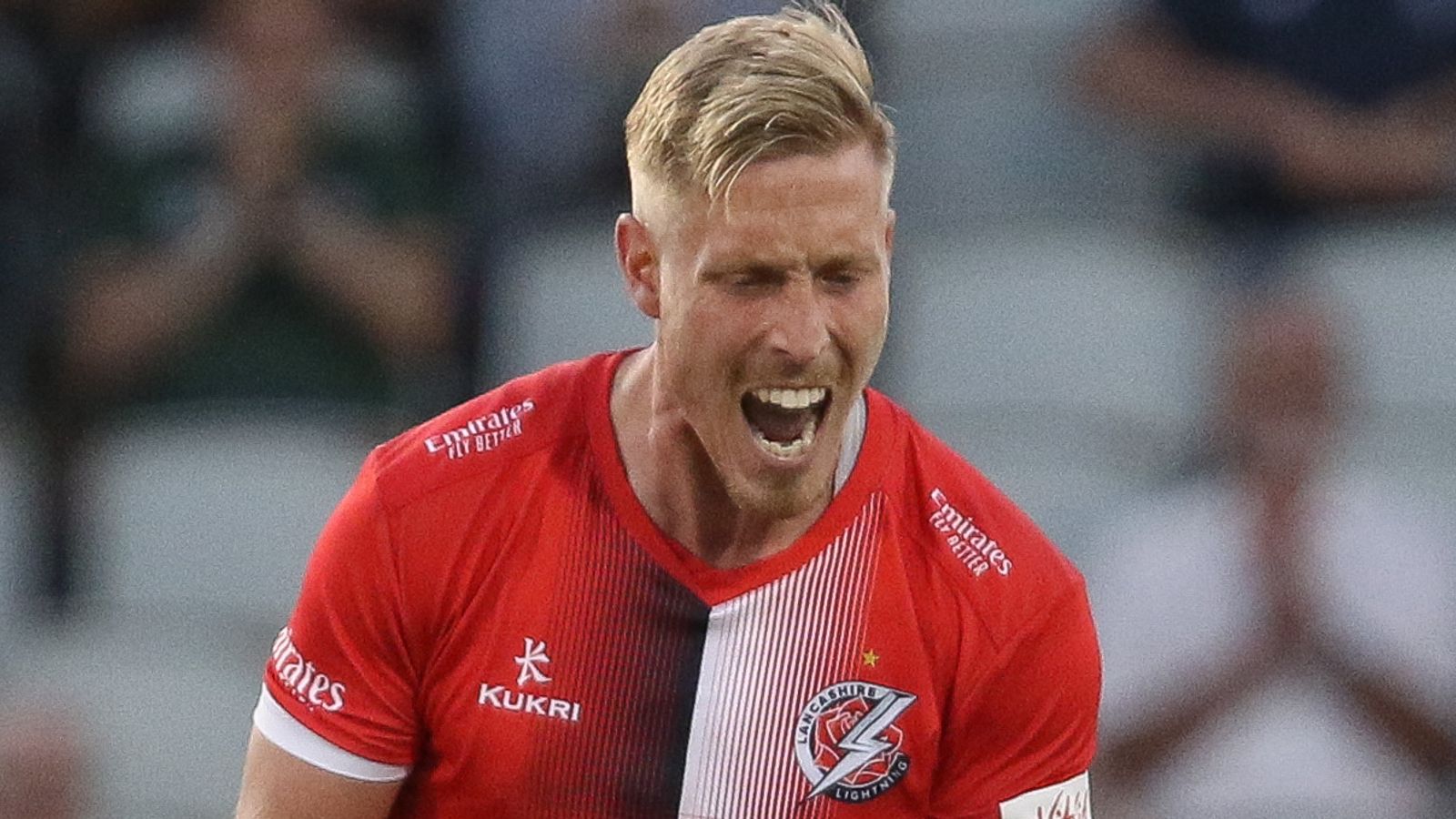 Lancashire Lightning in the Vitality Blast quarter-finals after a four-wicket victory over Roses rivals the Yorkshire Vikings at Emirates Old Trafford; hosts limit visitors to 127-8 as Luke Wood takes 4-20, then targets with more money after faltering with the bat

The Lancashire Lightning overcame a batting swing to beat the Yorkshire Vikings in a low-scoring thriller and join rivals Roses in the Vitality Blast quarter-finals.

But Lancashire then fell to 64-5 in the eighth and would have been 82-6 after 12 years if referee Ian Blackwell hadn’t turned down a lbw appeal from a delivery from Jordan Thompson which the ball followed according to the ball. would have hit the stumps.

There was a controversial moment when, with 15 races required, the Yorkshire sportingly chose not to miss Croft after slipping while running.

A dead bullet was officially announced before Croft and Wells crossed paths but Air sports commentator Mark Butcher felt Yorkshire would have been perfectly within their rights to fire the drummer.

Top Lancashire, Yorkshire and North Group Notts Outlaws sealed three of their group’s four qualifying spots, with the final spot to be determined in the final round of Sunday’s matches, with the Birmingham Bears and Worcestershire Rapids teams in contention.

The North group is now decided on a points-per-game basis with Derbyshire unable to complete their last two games due to a Covid outbreak.

Lancashire’s loss on Saturday would not have ended their hopes of progress but left them counting on other results to continue their journey.

They didn’t need that scenario, however, having passed Yorkshire, revenge their loss to Emerald Headingley on July 2 and preserve their undefeated home record in the Blast this season.

Wood hit with his first ball, Adam Lyth (8) being brilliantly caught by Lancashire captain and wicket keeper Dane Vilas to the side of the leg, then threw loaned Surrey man Mark Stoneman four deliveries later , after which the hosts kept the rate run in check.

Wood then picked up two wickets in as many balls later in the innings when he kicked Gary Ballance (31 of 21) and then caught Jordan Thompson (0) on his own bowling alley.

England captain Joe Root (32 of 37) struggled to get started, as did Harry Brook, the Blast’s top scorer this season, the latter having made 22 of 25 deliveries.

Allen nailed Lyth for two monster sixes over the course of successive deliveries as the home side got off to a quick chase – but things came to an end once he and Jennings were out in the span of four balls, with Alex Davies (13), Vilas (9) and Rob Jones (5) at the start.

Lancashire fought back, however, with Lamb sealing his victory when he slammed Matt Fisher back to back at the end of the 19th.