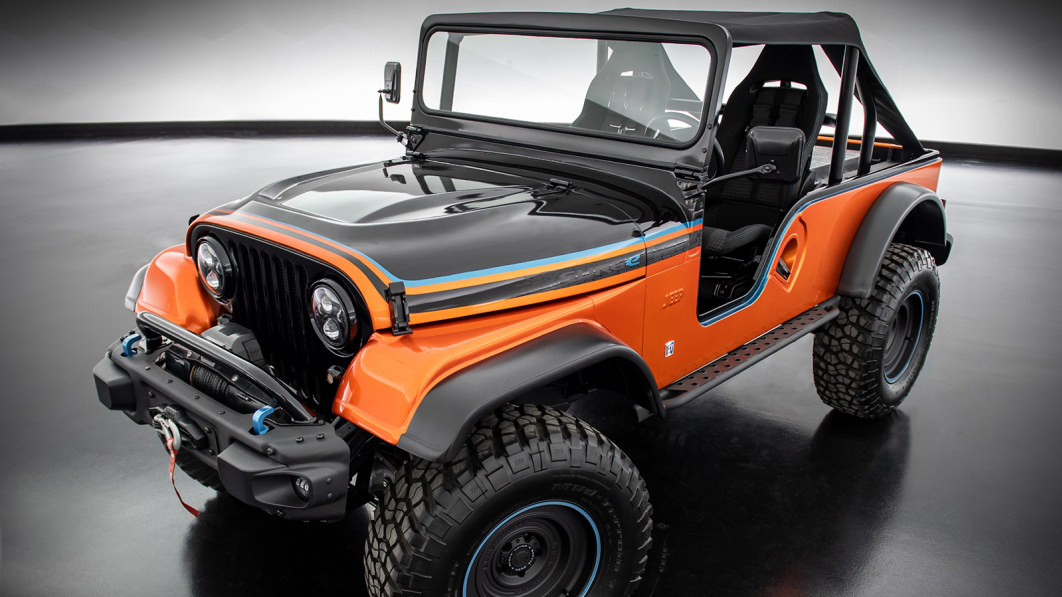 Stellantis kicks off its SEMA reveals with a trio of show trucks from Jeep and Ram. Although the total number of in-house customized vehicles is a little smaller than some years past, they are still quite striking. They also get a glimpse of potential new products from brands.

Just like in the past, Stellantis has built a beautiful resto-mod. This one started out as a CJ SUV, and it has a real eye on the future. Under the hood hides a 268 horsepower electric motor. It appears to be a slightly different setup than the one used on the Jeep Magneto concept, which had more power. Jeep makes no mention of a transmission, just that it has a two-speed four-wheel-drive transfer case. The transfer case sends power to the Jeep Performance Parts (JPP) Dana 44 axles. Power is provided by a 24-module 400-volt lithium-ion battery mounted behind the seats. What’s particularly interesting about all of this is that Jeep says this truck is a build to explore what might go into a Mopar EV conversion kit. So we could see something along these lines available in the next two ears to take on the still-in-development GM eCrate kit.

Of course, Jeep didn’t just put an electric powertrain in the CJ Surge. It was raised 2 inches and fitted with 18-inch Black Rhino wheels wrapped in 35-inch tires. The body looks like it’s been stretched and the hood has a custom power dome. The windshield was cut by 2 inches and wider fender flares were installed. JPP JK bumpers are fitted front and rear with JPP skid plates. He also has custom rock rails, a roll cage, a bikini top, and the colors orange, black, and blue. We’re particularly fond of the houndstooth seat inserts, but the whole thing looks great and got us excited for more EV conversion options.

While the CJ Surge is about what’s under the hood, the Ram 1500 Backcountry X is about what’s behind. It features custom parts called RamPack and RamRack, each of which expands the truck’s cargo carrying capabilities. The RamPack consists of a pair of bedside mounted storage boxes. They add 12.3 cubic feet of lockable, weather-sealed storage, in addition to the regular production RamBox bedside bins. RamPack boxes also have shelves and ties to make sure everything is secure and organized. They fit the lines of the truck very well, but part of that can be scratches that accentuate them.

The RamRack is an evolution of a previous concept idea of ​​sliding roof rails. It primarily consists of a metal tube frame that wraps around the RamPack with sliding Thule rails. It fits perfectly into this app, although we don’t know what it would look like without the RamPack.

Beyond those parts, Ram also added a workbench to the tailgate. It has conversion tables, an angle finder and provisions for mounting clamps and woodworking hardware. All of these parts look like they could be really useful and popular. In the case of the tailgate workbench, Ford already offers a similar feature on the F-150. So we might see them all appear as production props if there’s enough interest.

Again, many other features have been added to this Ram besides the prototype special parts. It has a spray-on bedliner, Mopar 2-inch lift kit with Fox shocks, 20-inch Fuel wheels, 37-inch tires, Mopar grille, Mopar off-road lights and Mopar side steps, all available now. The interior has custom green upholstery with orange stitching, extra grab handles, and a custom RamVac for cleaning. This is another feature that we could see becoming a handy accessory in the future.

Ironically, the Ram 1500 TRX-based concept is perhaps the lightest build of the three. It is primarily a showcase of current Ram accessories such as the RamBar, Mopar rock rails and 5-inch exhaust tips. It also includes custom skid plates and concept LED off-road lights. The 37-inch tires are wrapped around Black Rhino wheels. And of course, it has the bright black and yellow paint scheme and the matching black and yellow leather and Alcantara interior.