The river: where to start? With great storytelling and an “at the start” – for a good lifestyle 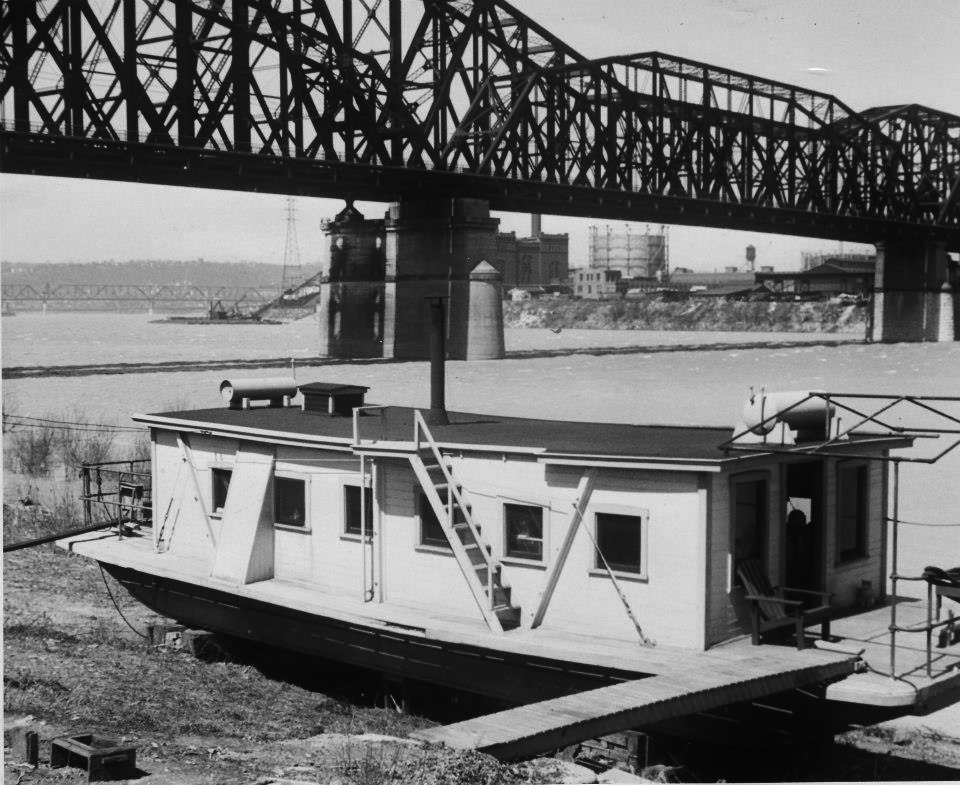 (Editor’s note: Captain Don needed a little break to mind his personal affairs – and he’ll be back soon. We thought this would be a good time to celebrate a great storytelling tradition that has started on December 10, 2017 with a question that will not surprise its readers: Where do I start?

(The captain of the riverboat is a storyteller, and that’s where the stories begin. Captain Don Sanders will share the stories of his long association with the river – from terror to the discovery of a fashion of love and love. life. This is the first in a long and continuous history.)

Where do I start?

The river was a terrifying place for a little boy. Dark, damp, foreboding; full of terrible sights and sounds.

Why were we still sitting on those hardwood benches behind the wheelhouse of the ISLAND QUEEN where, inside, strange old men rustled? The darkness alone was terrifying, but when that terrible whistle sounded, I was petrified.

My Dreamtime Houseboat is the slum of history. The incinerator was between the boat and the deck. (Photos provided)

And the time Aunt Mary hung her long legs from the stern of a ferry and dangled her feet in the river. It made me sick for fear that she would fall overboard and perish. It wasn’t until she turned around as young boatmen wrapped around her in clean, dry towels that my anxiety continued.

What could have been worse than the day in WWII at the Sears & Roebuck store on Reading Road in Cincinnati, when my mom and dad were angry after I pleaded with Grandma Edith to buy me this Springfield Rifle toy. He had the brightly painted wooden ball attached to the end of the slide bolt. They forbade me to have it.

Proudly, I walked with the rifle slung over my shoulder to our “machine”, as automobiles were then called. And when I saw an oriental-looking couple loading their purchases into the trunk of their machine, I shouted, “Look, Japs! And aimed.

As play was caught on the trigger spring, the hapless couple watched in terror and disbelief at the toy gun pointed at them. At the same time, Mother dropped the bag she was carrying and came charge towards me to snatch the pistol from my grip, but not before the trigger released with a loud metallic click as I shouted “POW”. ! 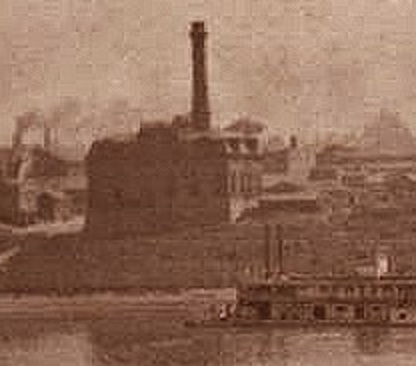 The Covington Incinerator as seen from Cincinnati.

Packages of my intended targets flew through the air and over the asphalt. Quickly the gun was picked up and thrown in the trunk as my embarrassed family and I quickly piled into our seats and the machine sped up.

Instead of coming home, Dad drove around downtown Cincinnati to release the tension I had created. A “ride” usually meant a trip where we could park and “watch the river”.

It was cheap family entertainment.

A ride on our Kentucky side of the Ohio River was, more often than not, a drive to Front Street, now Riverside Drive, where I threw rocks over the bank, trying, but never touching. the water.

This time, however, we were on the other side of the river, and soon we found ourselves in the “Bottoms” where Public Landing bordered the ominous waters of Ohio.

The commotion inside our automobile was heavy as thick fog on a cold November morning. It was only Grandma’s presence that kept my parents’ anger from escalating into “good spanking” – if there ever had been such a thing. In that deadly silence, Dad climbed over the top of the cobbled slope of the old steamboat landing stage, and our machine suddenly began to move steeply over the granite cobblestones. 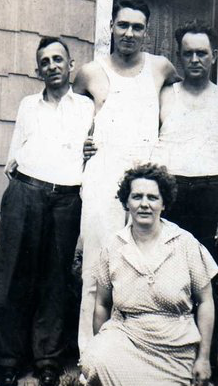 Walter Questa, my father, Jess Sanders, Jr. Grandpa Jesse, Sr. and Grandmother Edith in their side yard at 110 West. 38th Street in Latonia. Around 1936.

All I could see in front of me was the terrifying sight of the Ohio River where a long gray floating structure, taller than a building, was linked to the shore by heavy black chains. Beyond the structure, which served as a dock, the roof of the wheelhouse and the chimneys of a steamboat attached to the other side could be seen above the roof of the dock.

As loud as I could muster it, a heart-rending cry erupted from deep within me with such force that dad instinctively slammed the brake pedal to the ground. The machine instantly froze and rocked back and forth on its frame. Mom’s golden blonde hair flew forward towards the windshield. Outside, beyond our vehicle, a Negro boat hand was walking towards the docked boat, but he immediately stopped and shook his head at the sound of commotion above him. In his arms he carried a paper bag. He stared at us and must have wondered what it was, but he soon turned and continued to the steamboat moored on the other side of the quay where other boatmen awaited his arrival and the contents of the paper bag they were carrying. ‘he was carrying. Dad turned around and walked over to the suspension bridge, and I was spared the agony of getting closer to those angry waters.

At the foot of Main Street in Covington, where the street ended by the riverside, was the incinerator, a solidly constructed structure that rested on impressive boulders of limestone high enough above the ground to be above most flood waters. Two concrete ramps led to each end of the building where high roll-up doors allowed the passage of garbage trucks to come and go; carrying garbage from the city where it was burned under the building to a large chamber inside the limestone foundation. 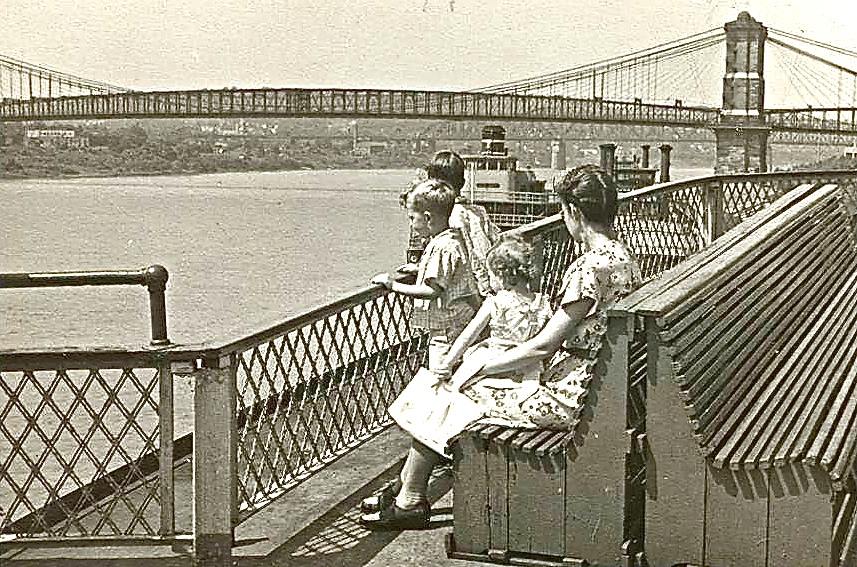 Those hardwood benches on the ISLAND QUEEN.

A single, tall brick chimney was the incinerator’s most distinctive feature. Inside the brick building was a self-propelled scale where trucks were weighed by a skinny little man who wrote down the numbers in a narrow ledger book. His name was Walter Questa and he was the most loyal and trustworthy friend of my grandparents who got on board with them and was considered a member of the family.

The incinerator, due to its remoteness, was a gathering place where employees from various city departments would meet and hang out while in the neighborhood. Police, public works and an occasional firefighter could be found “chewing” around the property. A few steps east and upstream of the tall brick structure was the most beautiful of the slums that stood on steel oil barrels on the shore where only the highest flooding could reach it.

The owners were friends of “Chalk Coon”, a foreman of the Public Works Department and a close family friend. Three wooden jonboats, with canopies above for shade, floated in the river below the slum. They used to take care of the “trotting lines” that the boatmen set up in the river to catch catfish and carp which they cleaned and sold somewhere ashore.

The slum and the smaller jonboats caught my eye, but when I was invited to get on one of the small boats, the old river fears came back and filled me with dread and I withdrew. , instead, in the security of Walter Questa’s small office. .

Even to this day, decades later, I dream of the shanty town high on the hill with the awning-shaded jonboats floating in the water below, and I imagine myself floating fearlessly on the river. .

It will be several years later, at ten, that I will rediscover a new and different world while waiting for my return to the river. 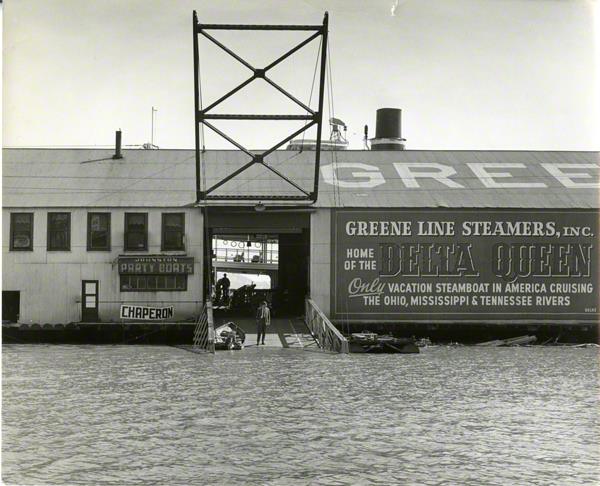 Greene Line Wharfboat seen from the top of the public wharf.

Captain Don Sanders is a river man. He has been a riverboat captain with the Delta Queen Steamboat Company and with Rising Star Casino. He learned to fly an airplane before learning to operate a “machine” and becoming a captain in the USAF. He is an adventurer, a historian and a storyteller. Now he is a columnist for the NKyTribune and will share his stories of growing up in Covington and his stories from the river. Hang on for the ride – the river has never looked so good.