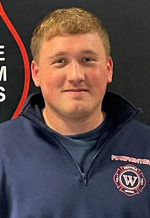 Griffith was born and raised in Gas City, Indiana, and dreamed of becoming a firefighter while his father was a volunteer firefighter for the Mill Township Fire Department. He is married to his wife, Tiffany, and they have a 10-year-old son named Finn who loves playing with the family dog, RiverLea. Griffith enjoys staying in shape and being outdoors and is truly delighted to have the opportunity to serve Westfield Fire and can’t wait to see what the future holds.

Howard, a native of Noblesville, is a second-generation firefighter who followed in his father’s footsteps and is a proud son of his mother, a career police officer. Her earliest memories were made at a fire station, playing and spending the night with her father and fellow firefighters. Howard is an avid mountain biker who enjoys staying in shape and being outdoors. He said he believed being a firefighter was the best job in the world and was always ready to help those in need.

Lambert is originally from Anderson. When not at work, he enjoys woodworking and hunting. When asked why he became a firefighter, Lambert said he wanted to help people through their worst day. He is married to his wife, Jennifer, and they have four children.