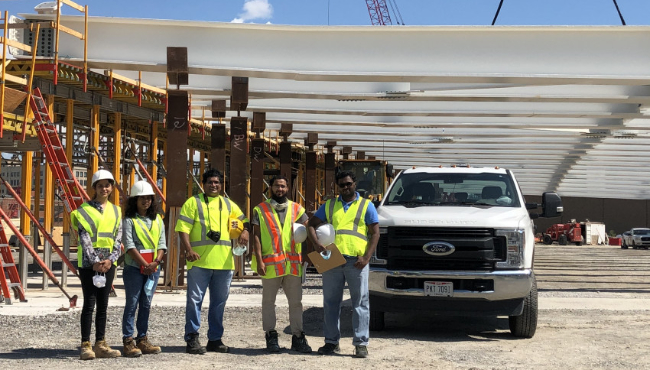 Western Michigan University’s Center for Structural Durability is already partnering with the Michigan Department of Transportation to build a bridge near Detroit that will be the largest of its kind in the United States.

Dr. Upul Attanayake, professor of civil engineering and construction, says there is a clear need to invest in Michigan’s bridges.

“Our infrastructure is designated as Grade D in American Society of Civil Engineer reports. In some places it may be C and in most places it is in D condition, which means we need to have adequate funding for the upgrade,” Attanayake said.

Attanayake is working with MDOT, private companies and a team of Western engineering students on a new Second Avenue bridge over I-94 in Detroit.

The new bridge is being built in a nearby parking lot. Crews will move it into place with new equipment specifically designed to move the five million pound structure.

One of the benefits of this technique is that I-94 will only need to be closed for a little over a week in total, resulting in less traffic disruption.

The WMU team placed sensors in the bridge to collect data on the design’s performance.

Harsha Amunugama, Ph.D. student working on the effort says it’s exciting to be part of a real-world project.

“It’s a good experience for me because I’m in school and I’m contributing to this project because we started from scratch,” Amunugama said.

While the professor is encouraged by the new intrastate funding, federal money sent to Michigan will have to be spent over five years, and Attanayake says a long-term funding solution is needed to ensure the bridges are kept going. good condition in the future.

“It’s not just about looking at what we call structurally deficient or functionally obsolete bridges. We need to look at how to improve the ability to carry the larger loads we’re seeing,” Attanayake said.

The bridge is expected to be completed in the spring or summer.